Diabetes is recognized as an important cause of premature death and disability and targeted by world leaders in the context of the prevention and control of noncommunicable diseases[1],[2],[3]. In this context, the World Health Assembly adopted a comprehensive global monitoring framework in 2013 and an accompanying roadmap to attain nine voluntary global targets to reach by 2025[4].

In countries of the WHO European region, the burden of noncommunicable diseases, including diabetes, and mental health, account for about 86 % of the deaths and 77 % of the disease burden in the Region[5]. The prevalence of diabetes is increasing, reaching rates of 10–12 % of the population in some countries of the Region. 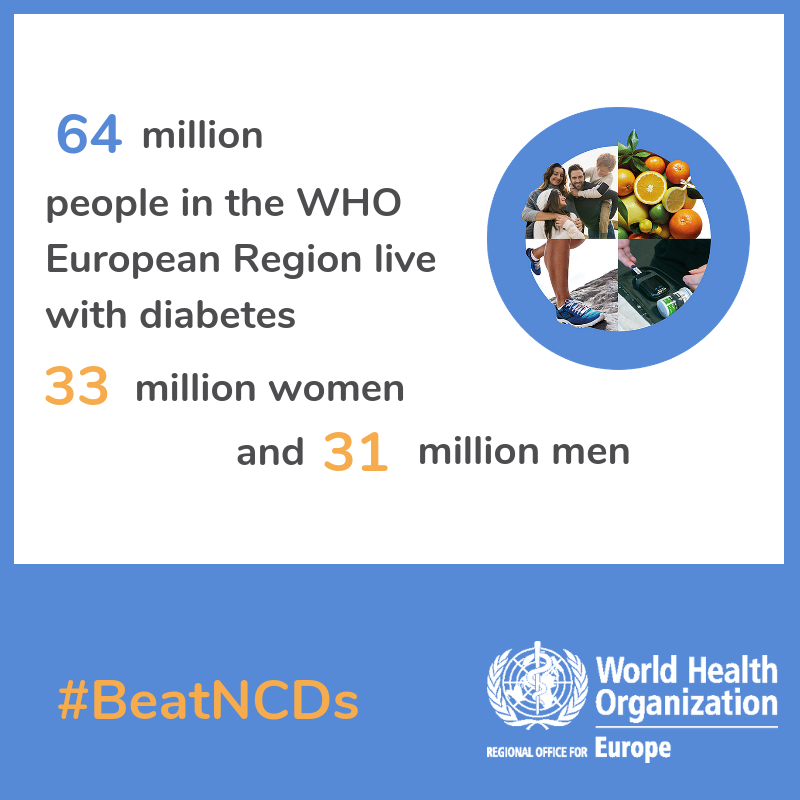 Diabetes can lead to cardiovascular disease, blindness, kidney failure, loss of limbs and loss of life. It causes suffering and hardship for the approximately 60 million people in the European region currently living with the disease.

Premature death from or living long term with a chronic condition and its related disability puts an increasing strain not only on people but also on health services and systems and, overall, on the economic development of countries.

Most importantly, the impacts of diabetes and other noncommunicable diseases can be largely prevented or reduced with an approach that incorporates evidence-based, affordable, cost-effective, population-wide and multisectoral interventions. WHO regional policies call for constant action[6] by tackling risk factors of diabetes such as overweight and obesity, unhealthy diets, physical inactivity and socioeconomic disadvantage and rolling-out highly cost-effective individual interventions to manage diabetes and its complications[7]. In addition to addressing risk factors, a focus on treatment, prevention of complications and self-management is essential.

The following text is derived from a paper developed for World Diabetes day 2018 as a brief discussion with Dr Bente Mikkelsen, Director of the Division of NCDs and Promoting Health through the Life-course, WHO Regional Office for Europe.

UN Member States met for the Third UN High-Level Meeting on NCDs (27 September 2018) committed to scaling up and accelerating the implementation of previously agreed commitments. Actions and tools required to stem the diabetes and NCD epidemics are well-known, and yet, to date, most countries are a long way off meeting their targets. What do you think the likelihood is of achieving the Sustainable Development Goal (SDG) target 3.4 by 2030?

The WHO European Region has long been leading the fight against NCDs – and is currently on track to achieve SDG target 3.4.*  The Region has been successful in sustaining a 1.5 % annual reduction in premature mortality from cardiovascular diseases, cancer, diabetes, and chronic respiratory diseases.

More specific assessments on their health, social and economic key determinants will be required and intervened upon if the underlying causes are to be modified. Regarding diabetes the region is not on track to halt its rise particularly due to the prevalence of obesity which is projected to increase during the forthcoming years leading the Region to dramatically fail in the attainment of the WHO targets on obesity and diabetes.

There is a need to scale up and implement the WHO “best buys” to reach these SDG related targets.  Strong political commitments coming out as a follow-up of the UN High Level meeting on NCDs are really important.

An unhealthy diet is one of the major risk factors for a range of chronic diseases, including type 2 diabetes and cardiovascular diseases. How can food manufacturers be motivated to take action and reformulate their products to include less salt, less sugar, enhanced nutrition labelling and restricting the marketing of unhealthy foods to children? 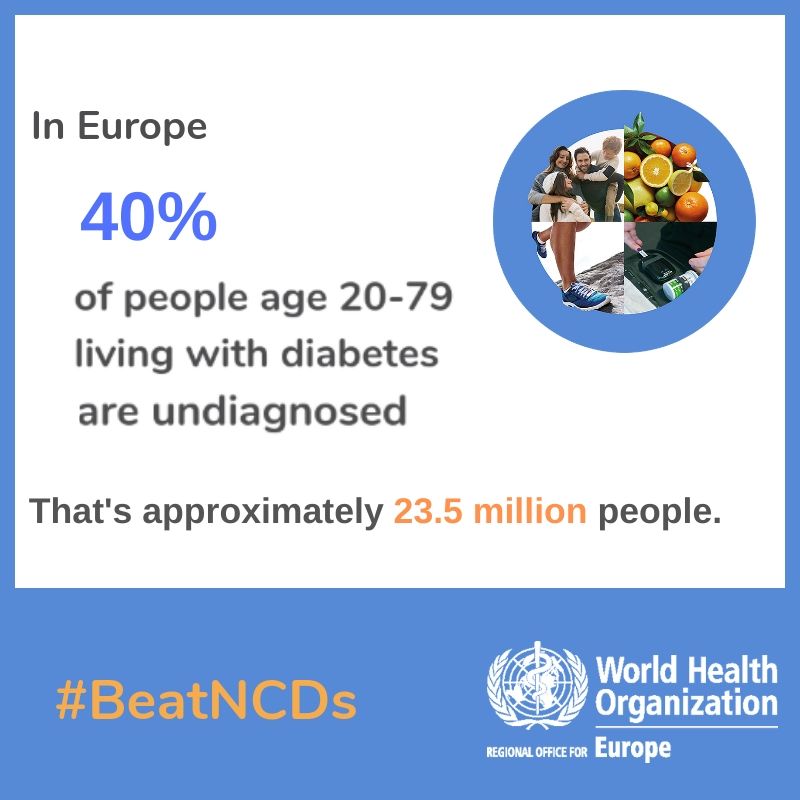 We know that type 2 diabetes can be prevented largely by addressing the major risk factors for noncommunicable diseases including alcohol, tobacco, diet and physical activity. However, to make substantial progress we need the commitment from whole of government and multi-stakeholder interaction, engagement and potentially collaboration in developing, implementing and evaluating policies and programmes based on transparency and accountability which can curb the rise in diabetes, otherwise progress will be slow or non-existent.

With almost 6 out of every 10 adults in the WHO European Region being overweight or obese, it is clear that it is fundamental to have actions in place that decisively address our obesogenic environments.

In addition to promoting physical activity, we need policies which improve the availability and accessibility of healthy foods, and make it more difficult or less appealing to consume unhealthy foods. Sound nutrition labelling is one of the key policy tools that can be leveraged to support healthy diets. 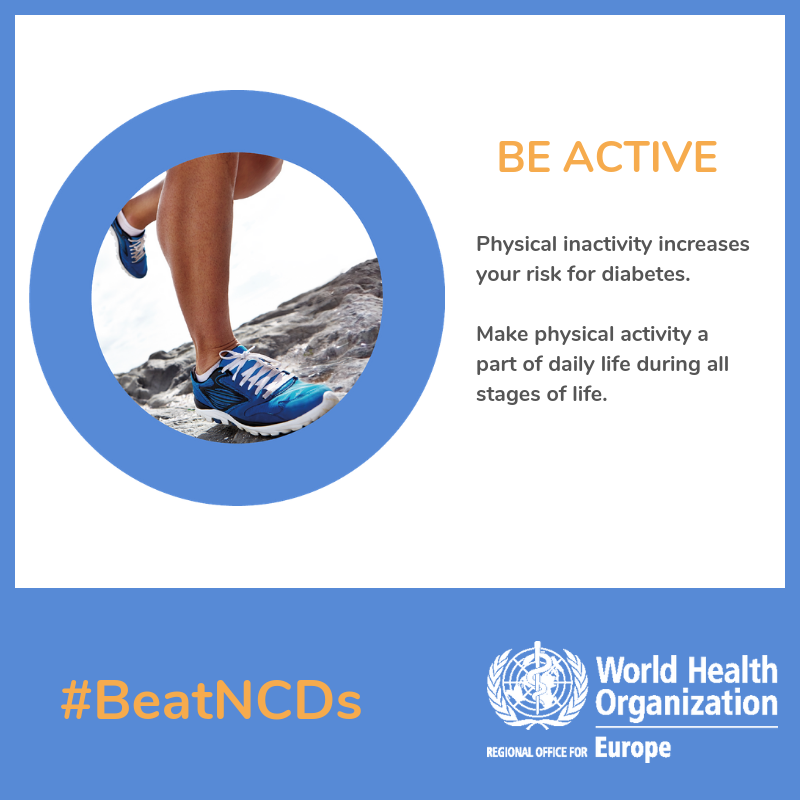 WHO studies show that when nutrition labelling is readily noticeable, understandable and compelling, it can stimulate consumers to make informed healthier food choices and to drive reformulation of products. However, existing labelling policies in most countries across the Region are not easy to understand and not consistently present on all foods which makes it difficult for consumers to make informed healthy choices. These labelling schemes have also been shown to be more useful for consumers with lower education levels and therefore potentially have a potential to reduce inequalities.

Another potential policy lever to curb obesity and prevent NCDS is reformulation of foods – specifically focusing on reducing content of salt, fats and sugars and eliminating trans-fats if implemented across the board. We already have encouraging examples of several countries in Europe that have demonstrated it is possible to challenge manufacturers to lower sugar content in foods through specific, time-bound targets for sugar reduction. 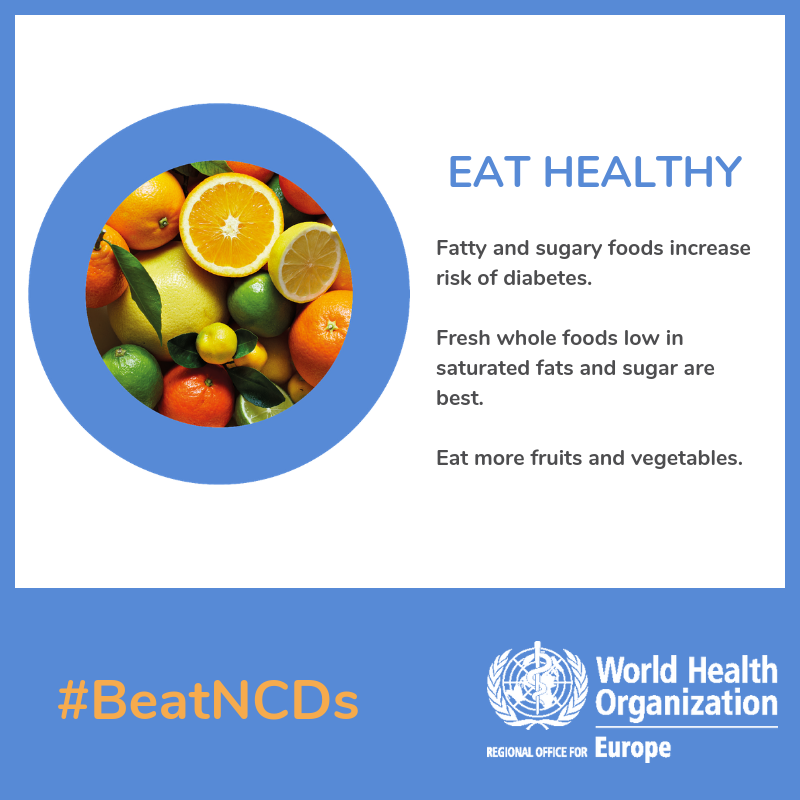 Others have used legislation such as taxation on sugary beverages based on the proven fact that these types of products are related with childhood obesity.

Just as taxing tobacco helps to reduce tobacco use, taxing sugary drinks can help reduce consumption of these products. Evidence shows that a tax on sugary drinks that raises prices can lead to a reduction in consumption, thus preventing obesity and diabetes and lead to savings on individual health as well as healthcare costs.

Finally, marketing to children needs to be addressed as children continue to be exposed to commercial messages promoting foods high in fats, salt and sugar, particularly and more than ever in the context of the digital world. This has harmful impacts and is and frankly unacceptable.

These are only a few examples – we need a complex systems approach to deal with a variety of challenges therefore WHO advocates for comprehensive actions.

All of the levers require the involvement and commitment of stakeholders across governments from agriculture, to environment, education and industry sectors, to professionals involved in physical activity promotion, catering and product development. The scale of the challenge can seem daunting, but with commitment from key players working together we can make rapid strides in the right direction.

Educating the public and improving early detection of risk factors can help decrease rates of NCDs, but progress has been slow. Awareness of the symptoms of type 2 diabetes and efforts in prevention, for example, continue to be a formidable challenge for the more than 200 million people living with undiagnosed type 2 diabetes worldwide. What do you believe are the barriers? 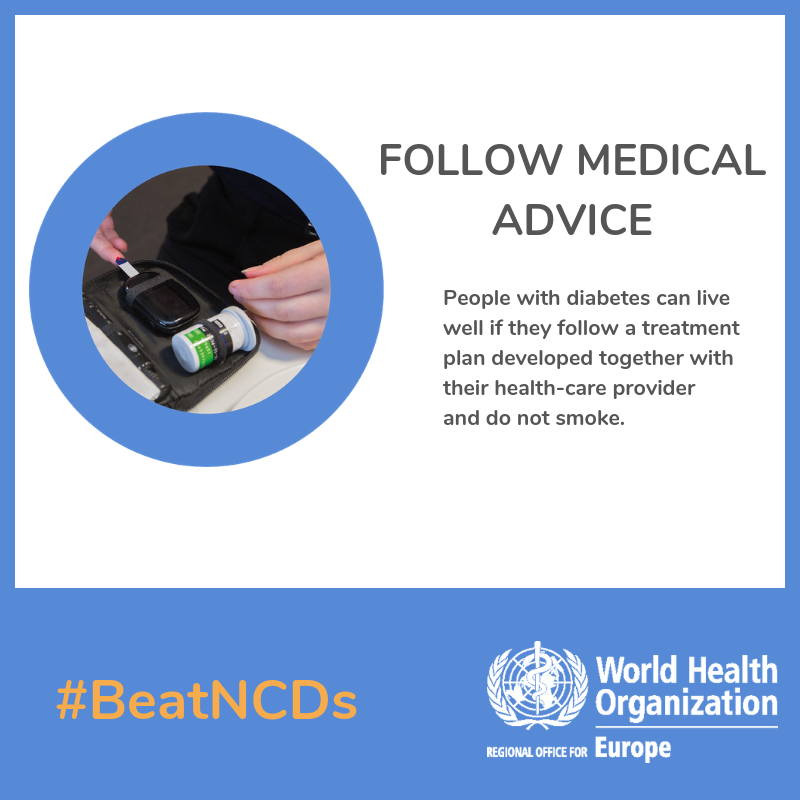 Increasing health literacy and improving health professional’s education are components in raising awareness and several countries are focusing on this. The focus on health promotion and using settings like schools and cities to achieve increased awareness also represent good entry points for action which involve the public.

*SDG 3.4: “By 2030, reduce by one third premature mortality from noncommunicable diseases through prevention and treatment and promote mental health and well-being”. 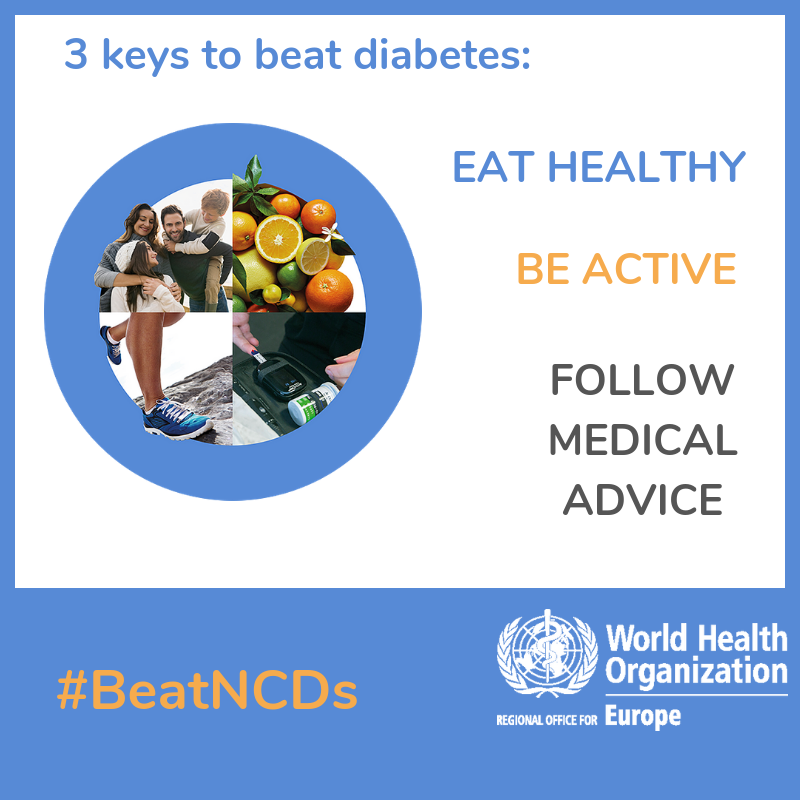 Dr Bente Mikkelsen is Director, Division of Noncommunicable Diseases and Promoting Health through the Life-course at the World Health Organization Regional Office for Europe (Copenhagen, Denmark).  She was formerly Head of Secretariat for the Global Coordination Mechanism on the prevention and control of NCDs at the World Health Organization Headquarters (Geneva, Switzerland) from its inception in 2014 as well as a former CEO of the Southern and Eastern Norway Regional Health Authority. Dr Mikkelsen is trained as a Gynaecologist and Obstetrician and holds a Master’s degree in Health Administration and Management from the University of Oslo. Her current focus is on achieving the SDGs through the reduction of premature deaths from NCDs and promoting health through the life-course in the context of WHO General Programme of Work, Health 2020 working across sectors with multi-stakeholders, within and beyond the health sector using innovation, implementation research, health literacy and new technologies.  http://www.euro.who.int/en/home 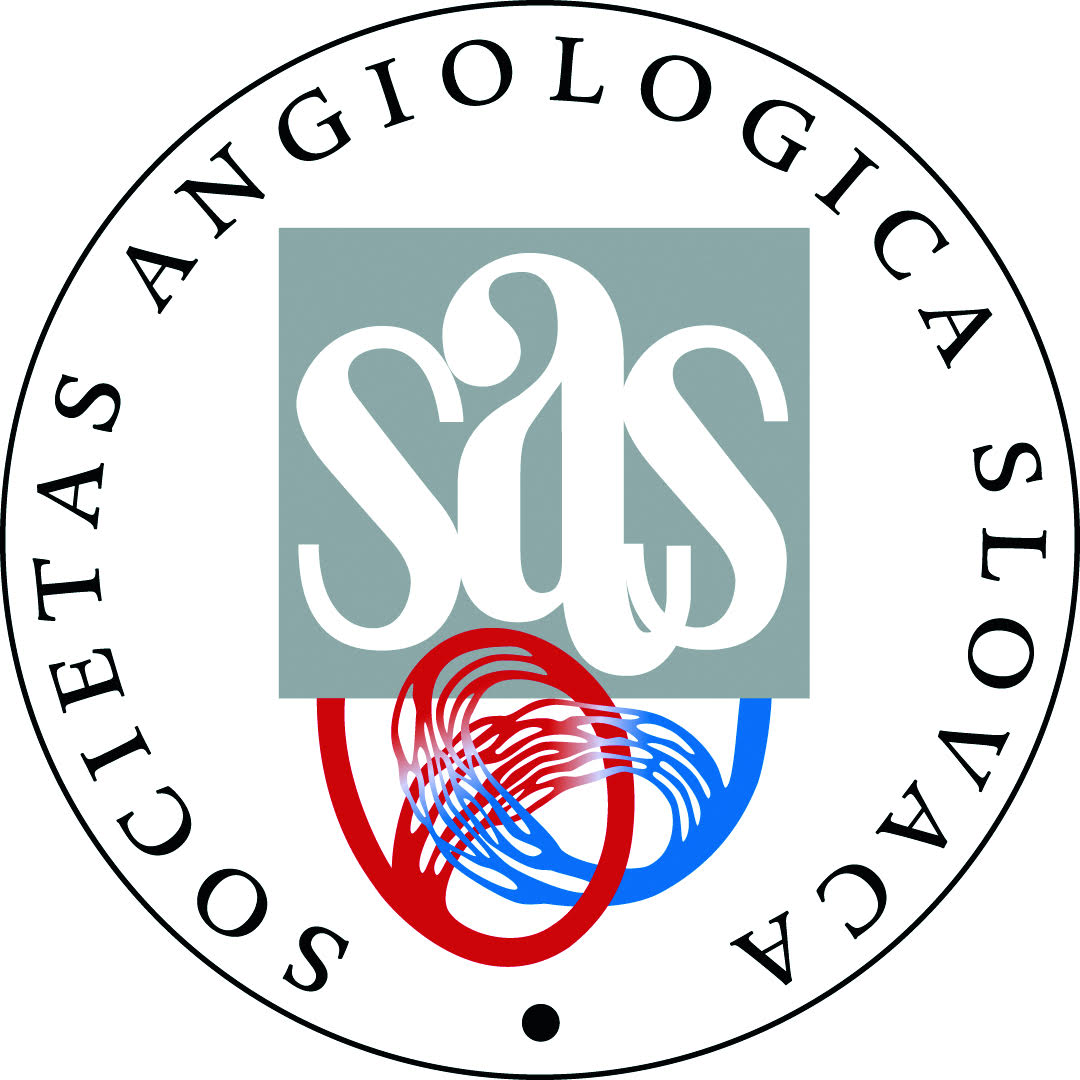 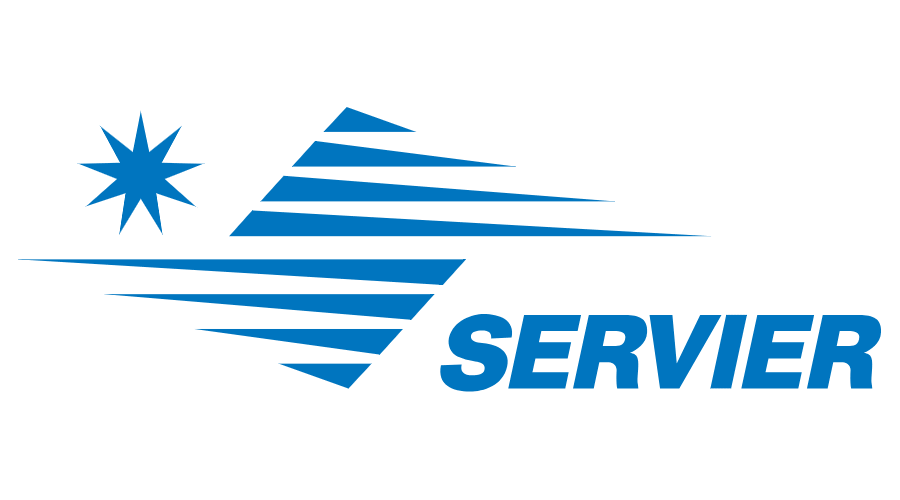